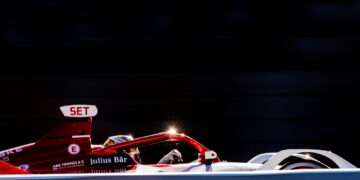 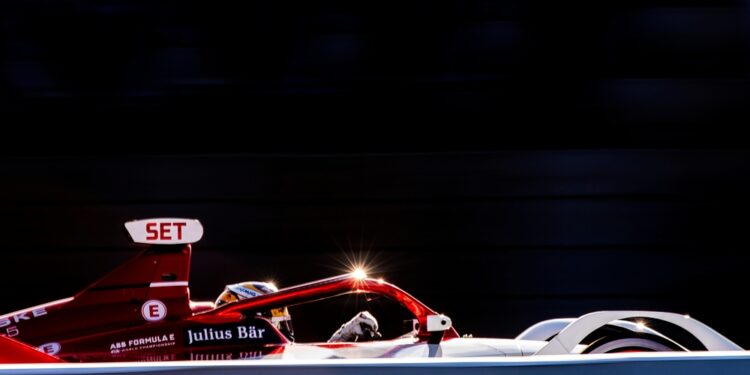 London E-Prix 1 – Dragon/Penske’s Sergio Sette Camara topped the times in FP1 with Mitch Evans and Nick Cassidy over a tenth and a half behind.

The first of three half hour practice sessions, one to be held each day over the course of the weekend, to be held on the unique indoor/outdoor circuit at the ExCeL London. Since last season the double hairpin which made up turns 10 and 11 have been replaced by a chicane with a much shorter run after that to the next chicane of turns 12 and 13.

Nyck de Vries was the early pacesetter initially with a time in the 1:17s but it wasn’t long before he dropped it to a 1:16.431, while Mitch Evans and Sergio Sette Camara slotted in behind. The reigning champion held that top spot for the first half of the session but was then demoted by Envision’s Robin Frijns with a 1:15.562 while the other Mercedes of Stoffel Vandoorne jumped into P2.

While de Vries also improved but while his initial 1:15 time didn’t see him improve, his second effort got him back to the top with a 1:15.083 while Vandoorne also outpaced Frijns while the two Andretti of Jake Dennis, who won the opening race in London last year, and Oliver Askew were the only others in the 1:15s at that time.

Into the final ten minutes of the practice and it was reported that the teams were having trouble with their GPS systems meaning that it was difficult to know where exactly all the cars were on track for traffic purposes. With times constantly being set, things were ever-changing on the times screens but at the top Pascal Wehrlein had put the other German team on top, as the Porsche racer shaved a few hundredths off for a 1:15.050.

In the final five minutes drivers started breaking well into the 1:14s with first Evans, a 1:14.659, and then Dragon’s Sette Camara taking to the top with a 1:14.487. Just as the session looked to be ending without incident, championship challenger Edoardo Mortara locked up into T1 and spun though he managed to keep his Venturi out of the wall. That brought out a brief yellow flag before the Swiss driver was able to right himself and continue.

The session ended very well for Dragon with Sette Camara’s time holding on to P1 with Antonio Giovinazzi in P4 just 0.271 seconds off his teammate. Jaguar’s Evans remained in P2 while Nick Cassidy, who was very strong in qualifying last time out in New York, was P3.

The top ten was rounded out by the second Jaguar of Sam Bird while Antonio Felix da Costa, who won the second New York race last time out, was P10 with a 1:15.093.