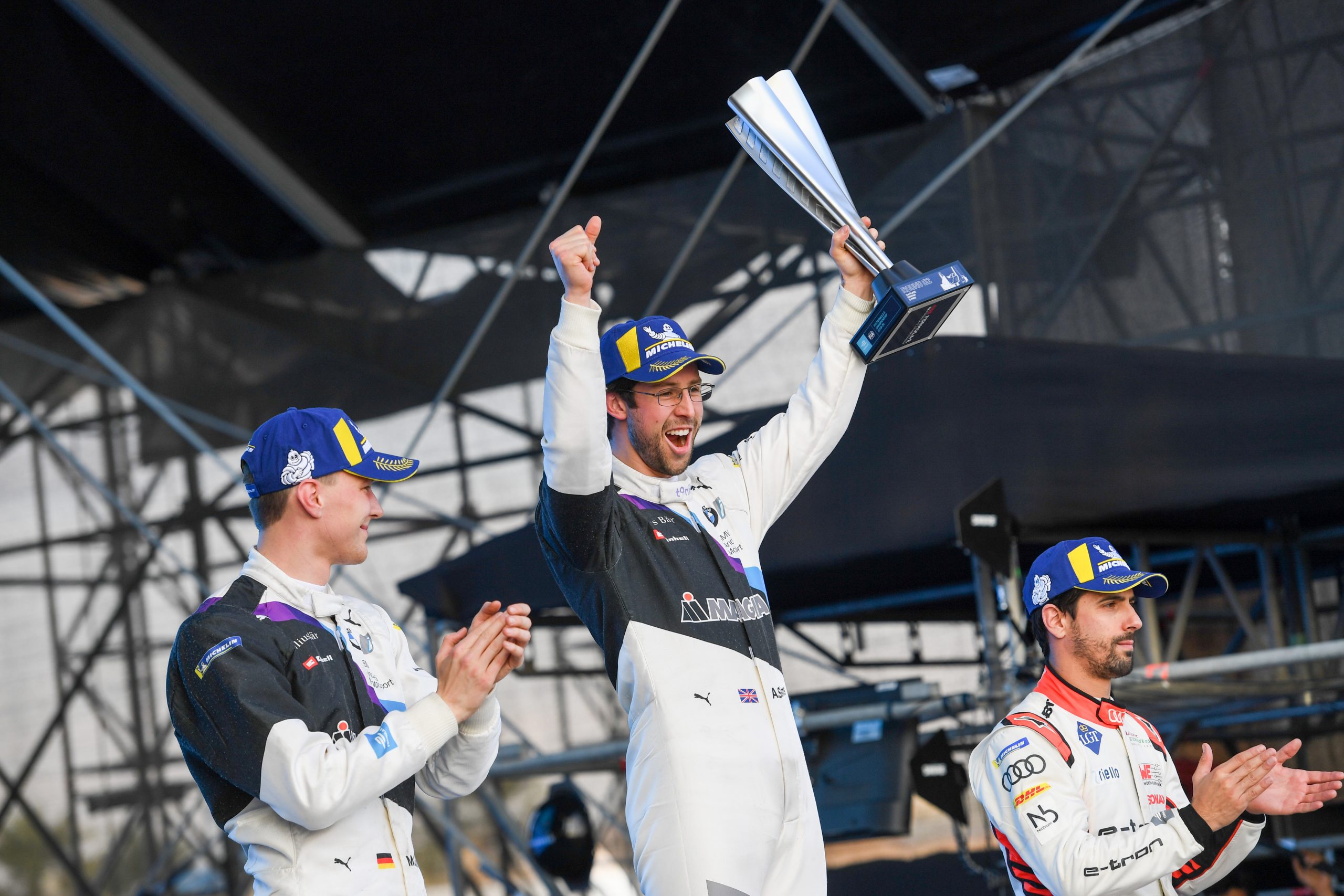 Diriyah E-Prix 2 – Alexander Sims took his first win in the ABB FIA Formula E Championship yesterday as he brought his BMW i Andretti home after leading from lights to flag.


After failing to convert yesterday’s pole position, instead he fell back and out of podium contention during the race, Sims was possibly the only driver to have a trouble free time on the second race day and indeed set a new record for most consecutive pole positions, New York race 2 back in July as well as the two Diriyah poles this weekend. He then dominated the race, opening up more than a second of a gap after only a few corners and aceing two Safety Car restarts along the way to become the new Championship leader.

The Brit celebrated both his victory and a BMW i Andretti 1-2 on the podium but the Stewards later handed Maximilian Guenther a 24 second penalty for overtaking while the race was still under safety car conditions.

It was a clean start to the race with the top drivers all holding station for the first eight minutes before Antonio Felix da Costa slid his DS Techeetah past Lucas di Grassi to take third position. A few laps later, as da Costa was lining Sebastien Buemi up, the Nissan e.dams slowed to move towards the Attack Mode activation zone and there was contact between the two and Buemi spun.

Da Costa continued on gaining second position while Buemi drove straight across the oncoming traffic as he rejoined the race in 14th. Investigations into the incident soon followed and 10 minutes later da Costa was issued with a drive through penalty, dropping him out of the points, while Buemi received a 10 second time penalty.

The first casualty in the race occurred on lap 13, Mitch Evans was looking for a way past Sam Bird but two car widths and a narrowing track was unlikely to end well, the two made contact causing damage to both. Bird retired his Envision Virgin at the side of the track bringing the Safety Car out while Evans pitted briefly before rejoining at the back of the pack. 20 minutes later the Panasonic Jaguar driver was handed a drive through penalty which left him well out of contention.

The re-start after the Safety Car would prove to be pivotal to the race, Maximilian Guenther, amongst others, took advantage of drivers going to the Attack Mode activation zone and passed them. However as the activation zone was before the Safety Car line it was later deemed that these drivers, BMW i Andretti’s Guenther included, had illegally overtaken under Safety Car conditions and had 24 seconds, equivalent to a drive through penalty, added to their race time.

The race had only resumed for a few minutes when Robin Frijns made a bad day worse for Envision Virgin Racing, he lost control of his car and ended his day in the wall. When the green flags were waved again, Sims once more pulled well ahead of the pack however the Safety Car had been called in too early as Frijns’ car and marshalls were still on track. A Full Course Yellow was swiftly announced and the track safely cleared. With the two Safety Car periods and brief Full Course Yellow, the total energy reduction for the race was 12kWh.

Audi Sport Abt Schaeffler’s Lucas di Grassi lost places to Maximilian Guenther and Stoffel Vandoorne as he activated his final Attack Mode. He swiftly regained third from the Belgian Mercedes-Benz EQ driver but couldn’t find a way past the German before the chequered flag.

As the flag flew converted driver through penalties were applied to Andre Lotterer and Frijns for overtaking behind the Safety Car, while Felipe Massa’s was for speeding in the pit lane while he was serving a drive through penalty for starting the race in the wrong grid position.

When all penalties were applied, Lucas di Grassi and Stoffel Vandoorne were awarded second and third places. Edoardo Mortara and ROKiT Venturi Racing took fourth while Oliver Rowland, who started 16th and was the one his Nissan teammate Buemi pulled across the track in front of while recovering from his spin, was fifth.

Despite taking the chequered flag in 11th, Daniel Abt profited from the late penalties to be classified sixth. Abt had to deal with his own drive through during the first part of the race for a throttle map infringement on his Audi.

James Calado who has had a tough debut in the series with incidents each day in practice and qualifying sessions, was the sole point scorer for Panasonic Jaguar Racing in the second Diriyah race.

After a FP3 crash required a battery change for Jean-Eric Vergne, demoting him to the back of the grid with a stop/go penalty to serve during the race, the defending champion declared before the race that he had no chance of points and needed a miracle. The Frenchman was classified eighth.

The final point positions went to Brendon Hartley who took home GEOX Dragon’s first points of the season in ninth, and Antonio Felix da Costa who also claimed the point for fastest lap, meaning that both Techeetahs score points despite having to serve drive throughs during the E-Prix.

The first drama of the afternoon started even before the lights went out as Jérôme d’Ambrosio’s Mahindra refused to move from the dummy grid. The Belgian reported than nothing was working before marshals removed his car from the track, which means that we still haven’t had a full 24 car E-Prix start.