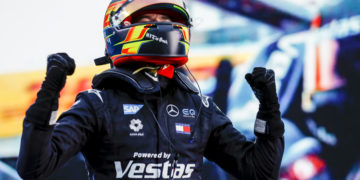 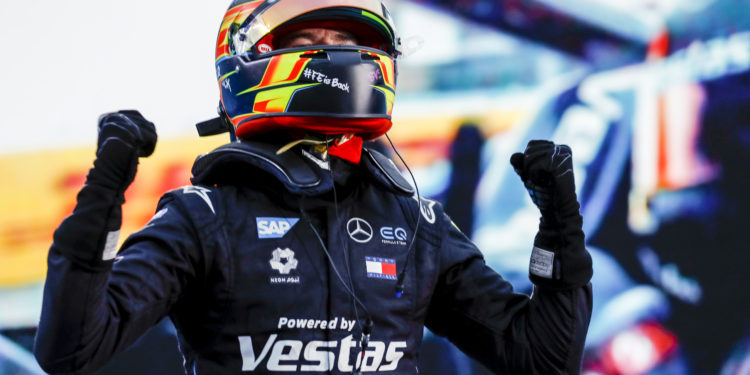 A very well behaved first lap saw the full 24 car grid survive with bodywork seemingly intact. The big move seemed like it was going to come from Rene Rast as he challenged Sebastien Buemi into the first corner but the Nissan held his spot and by the end of the first lap it was Nyck de Vries who made the move as he slipped past Rast to take third.

After that, the early changes at the front all involved losing and regaining places upon activating and using Attack Mode. As the top three finished their time with the extra power they were all back in place with Vandoorne leading Buemi and de Vries but now they had pulled out just over two seconds over the fourth placed Audi.

It was all pretty smooth sailing for the front runners until the final minute when de Vries slipped past Buemi to take second before attempting to reel in his teammate. The Dutchman didn’t manage to take the win but still brought the Mercedes-Benz EQ team a 1-2 to end their debut season as Vandoorne gave the team their maiden victory.

Joining the Mercedes on the podium was Sebastien Buemi, the Frenchman was disappointed to miss out on pole earlier and felt that the Nissan e.dams just wasn’t “quick enough today”.

Rene Rast couldn’t repeat his podium appearance of yesterday but still put in a very strong race to finish fourth, his Audi Sport Abt Schaeffler teammate joined him in the points after finishing sixth.

In his final appearance for Envision Virgin Racing, Sam Bird drove a strong race from fourteenth to fifth, and picked up the point for fastest lap in the top ten too. The Virgin team were on for a double points finish as Frijns had spent the whole race in the points but fell back a few laps from the end and retired with a puncture, most likely from contact when di Grassi thunked past him.

Starting in 21st, Jean-Eric Vergne scythed his way through the traffic to finish seventh and just narrowly missed finishing second in the championship by one point to Vandoorne.

It was a third points finish in a row for Alex Lynn who has really made the most of his time in Berlin with the Mahindra team. The Brit finished the season with more points than the man he replaced, Pascal Wehrlein, and only three points behind teammate Jerome d’Ambrosio.

The season 6 champion, Antonio Felix da Costa, also came through the field from nineteenth to ninth but with the championship secured over the weekend da Costa took the time to enjoy the car saying “I went out there just to have as much fun as I possibly could, I was laughing in the car sometimes.”

Final points of the season went to Rokit Venturi Racing and Edoardo Mortara. There were two retirements from the race, the aforementioned Robin Frijns as well as yesterday’s pole sitter and race winner, Oliver Rowland. Rowland lost some bodywork out on track and then pulling into the pits from seventeenth.

As a result of today’s race Vandoorne took second in the drivers’ championship from Jean-Eric Vergne by a solitary point, while Nissan e.dams secured their second place in the teams’ championship and Mercedes-Benz EQ jumped Virgin and BMW i Andretti to take third spot.