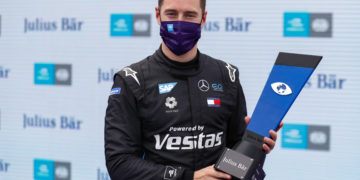 Vandoorne on pole for the final race of the season

Vandoorne on pole for the final race of the season 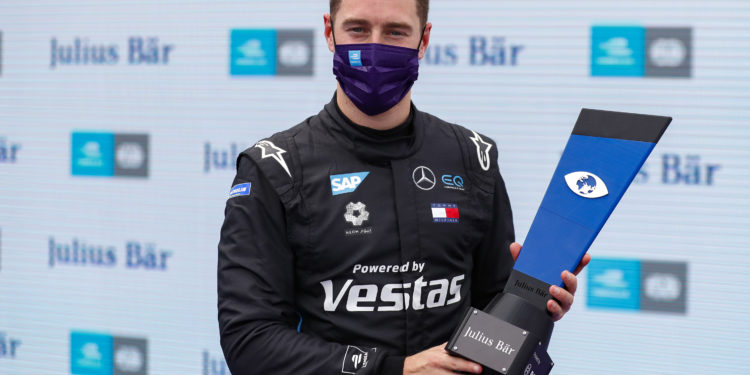 Stoffel Vandoorne takes the second pole of his Formula E career as he put his Mercedes-Benz EQ into prime position for today’s Berlin race.

After setting the fastest time in group qualifying, Sebastien Buemi was last out on track during Super Pole but just fell short of knocking Vandoorne off the top of the times, meaning that the Nissan e.dams will line up beside the Mercedes on the front row later today.

Audi Sport Abt Schaeffler’s Rene Rast had another fantastic qualifying session, his fourth place yesterday was converted into his first podium as he picked up the third place trophy so it now remains to be seen what he can convert his third on the grid into today.

It was a double Super Pole appearance for Mercedes as Nyck de Vries finished the season’s qualifying with another appearance in the top spot shootout. The Dutchman, who will start fourth today has made it to the final part of qualifying more often than not this season.

Fifth was Robin Frijns who will be looking to add another podium finish to the two second places he has already taken for Envision Virgin Racing over the past week and a half.

The final pole challenger was Rockit Venturi Racing’s Edoardo Mortara who wasn’t happy with his effort but gives him a good chance to pick up more points for the team later.

Alex Lynn continued his run of very strong qualifying but just missed out on another Super Pole leaving his Mahindra in seventh. The season has finally seemed to be falling into place for Neel Jani, a first Super Pole appearance and first points finish yesterday, and now starting eighth he is again the highest placed Tag Heuer Porsche.

It was another ninth for Sergio Sette Camara, another of the new for Berlin drivers, the Brazilian seems to have gotten to grips with the car and will hope to end on a high with his first point for Geox Dragon. While Lucas di Grassi rounded out the top ten for Audi.

The track evolution between the first and second qualifying groups was very apparent today as, aside from Nico Mueller, the top six in the championship were out-qualified by everyone and will start at the back with yesterday’s pole sitter and race winner, Oliver Rowland, the final man on the grid.