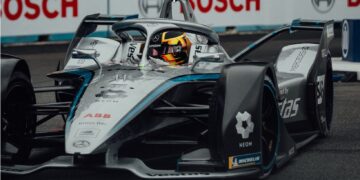 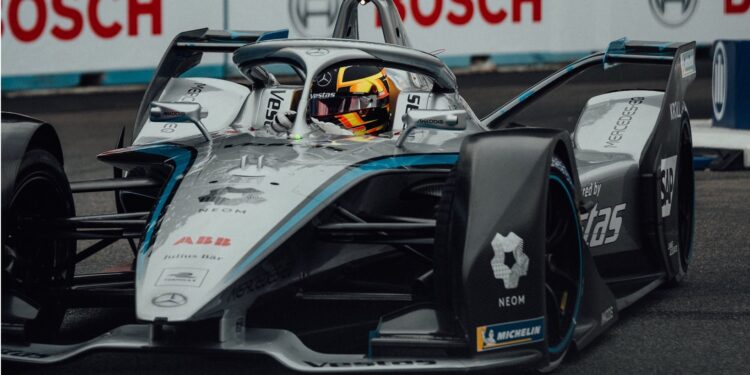 Rome E-Prix 1 – Stoffel Vandoorne beat Robin Frijns to pole, sealing Mercedes-EQ’s third pole of the season, ahead of the first of the races this weekend.

The first qualifying group started will all cars headed out on track pretty soon after the session went green and it was Jake Dennis holding the top spot initially with a 1:41.020 but times were quickly moved down into the 1:40s and it was Jaguar’s Mitch Evans who was P1 with a 1:40.375 while the track quieted as most cars headed back to the pits before the final runs.

Despite a lock up on his penultimate lap, Dennis got everything together when it mattered and put his Andretti on top at the end with a 1:40.069. Things did not go as well for Sam Bird however as traffic saw him too late to start a final lap, taking the chequered flag instead. Evans also got into traffic trouble and that left them both out of the qualification spots in P5, for Evans, and P7 for Bird.

The Envision Racing of Robin Frijns slotted into P2 with Stoffel Vandoorne putting in the exact same time, a 1:40.128, in the Mercedes. The final duel place went to the Mexico E-Prix winner, Pascal Wehrlein, while the championship leader, Edoardo Mortara, split the Jaguars and failed to progress.

The second group were also all keen to get on track and it was the Techeetah of Jean-Eric Vergne who ended the opening round of quick laps in the best place. The Frenchman’s 1:40.405, nearly three tenths ahead of his teammate, Antonio Felix da Costa.

Oliver Rowland, who was one of the big providers of drama in the practice sessions earlier, was P3 for Mahindra before the final couple of minutes of fast laps. The Mercedes of Nyck de Vries was the first to start the last lap, but the Dutchman had a big lockup on the lap which held him back slightly. Not that that would’ve mattered as behind him Vergne was putting in fastest sectors.

Andre Lotterer put Porsche into P1 briefly before Vergne reclaimed it, but in the end it was the other Techeetah, who got the place as da Costa, while not going faster than Vergne in the first two sectors, aced the third and took P1 with a 1:40.227.

Behind them though Rowland spun on his lap and while he did very well to pull behind a hoarding and clear the track, the yellow flags remained which prevented any of the cars behind him from going faster.

The Techeetahs, Lotterer and de Vries progressed to the duels.

The first duel was only going one way, de Vries was on track first and Dennis just couldn’t compete with the pace of the Mercedes, who continuously extended his lead through the lap, and will progress.

It was Frijns with the initial advantage and while Lotterer did slightly close up, the Dutchman was much better in sector two, pulling over three tenths on the Porsche, but it was the final sector which sealed it and the Envision ended over 0.7 seconds faster. Not the worst qualifying for Lotterer however after his crash at the end of FP2.

Duel three saw Vandoorne with the slightest of advantages in the first sector but it wasn’t the cleanest of laps for Vergne who locked up missing an apex in sector 2, and in the end it was over half a second difference between the Mercedes and Techeetah.

The quickest driver from group B, da Costa, had advantage in the first sector and while Wehrlein did pull some time back in the second sector, it wasn’t enough and that means that neither Porsche will progress in the knockout stages.

It was a battle of the Dutchmen in the first semi-final, de Vries first out on track and while it was advantage Mercedes in sector 1, Frijns’ second sector was two tenths quicker which was the all the difference needed as the two put in very similar ends to their laps but the Envision will progress

Vandoorne had the early advantage as he tried to get Mercedes to the final again, but a mistake at the chicane saw da Costa recover a two tenth deficit and move ahead, despite that, the Belgian managed to just clinch it by 0.015 seconds.

The fight for pole and the three championship points that go along with it, and despite a big lock up for Frijns near the start that only lost him 0.080, but a tidy lap from Vandoorne compared to a scrappier, but interesting to watch one from the Envision, has Mercedes in the prime spot for the third time this year.

De Vries will start ahead of da Costa on row two thanks to a quicker lap in the semi-finals. Similarly for P5-P8, Vergne was the fastest non-qualifier from the quarters for he will be P5, with Dennis, Wehrlein and Lotter filling the rest of them.

As the polesitter started the day in group A, the remaining odd numbered grid slots go to the group A drivers, while the group Bs will fill in the even numbered spaces.