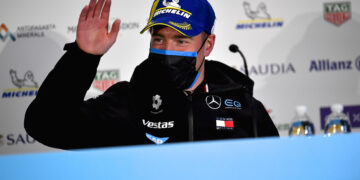 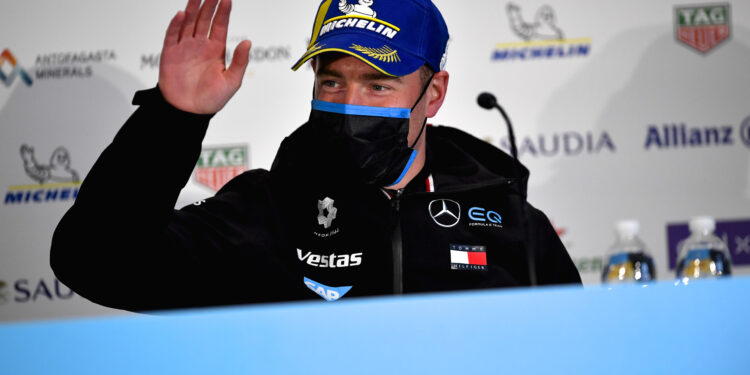 London E-Prix 2 – Stoffel Vandoorne put Mercedes on pole for this afternoon’s race after seeing off Oliver Rowland in the Super Pole shootout.


Group one all headed out together and like yesterday Edoardo Mortara, who was last out, gave himself a nice gap to the group in front though the Venturi driver only just got across the line to start his lap in time. His strategy didn’t work as well as yesterday and Mortara was only fourth fastest. There was some battling on the outlap with Sam Bird lunging past Nyck de Vries but it worked out better for the Mercedes driver as he ended on top of times with a 1:20.511, himself and Robin Frijns being the only two into the 1:20s, with the other four over half a second slower.

As there were a few drops of rain during the opening group, group 2 were all out early but it was Nick Cassidy, at the front of the queue, who tried something different and went for his fast lap instead of a preparation lap as the other five did. The idea with Cassidy was that if the rain got heavier he would’ve got the best of the track conditions but it didn’t work out for him and his early lap was only the fifth fastest in his group and out of the super pole spots.

While the second group were slower in the second sector, the fully outdoor one, their other two sector times say Stoffel Vandoorn beat teammate de Vries’ time by just over half a tenth while Pascal Wehrlein went P3 and the two Audis of Lucas di Grassi, the fastest in FP3, and Rene Rast provisionally took the final two Super Pole positions.

When the third group emerged the rain had stopped and it was yesterday’s polesitter, Alex Lynn, who despite slightly hitting the wall put in the best time so far a 1:20.319 with Mitch Evans just 0.002 behind. Oliver Rowland and Maximilian Guenther also slipped into the top 6 while it wasn’t as good news for Andre Lotterer and the second Mahindra Alexander Sims, as the two of them were over seven tenths off on their laps leaving them out of the top ten.

Group four saw the return of a few drops of rain and unlike yesterday where that filled half the Super Pole slots, today they are the only group that won’t be represented in the shootout. As the best that G4 could produce was Sergio Sette Camara’s 1:20.641 for P9.

That meant Lynn, Evans, Vandoorne, Rowland, Guenther and de Vries would be the ones to go for pole. Though there was confusion as it was announced that Guenther, di Grassi, Rast, Frijns, de Vries, Mortara, Frijns and Eriksson were all being investigated for going too slow, over 120% of their qualifying time, on their inlaps.

De Vries was the first out and first to deal with the return of some rain as he posted a 1:20.353 while hitting some walls on the way. The time was good enough to hold off Guenther’s effort as the BMW driver couldn’t get closer than 0.045 seconds to the Mercedes.

Rowland was third to try his hand and the Nissan driver made the most of it to sit on provisional pole by over a tenth. Unfortunately for him he didn’t get to enjoy it for long as Vandoorne put in a spectacular first sector, although he lost most of that advantage over the rest of the lap it was good enough to put Mercedes back on top by 0.041 seconds.

The penultimate attempt was over almost as soon as it started as Evans made a mistake at T1 and got out of shape, losing him a lot of time and while he did have a very good sector 2 and the best sector 3 so far, the Jaguar was only able to beat Guenther’s time.

Last driver out on track was Lynn, the Brit hoping to repeat his feat from yesterday and secure pole for his home race but it wasn’t to be and the Mahindra racer will start from P3 after his lap was just 0.067 off Vandoorne’s 1:20.181.

Wehrlein will be the highest placed Tag Heuer Porsche and he’ll start from P7 after setting a 1:20.569 while Frijns’ attempt was only half a tenth slower and he’ll start P8. The top ten will be rounded out by Sette Camara and di Grassi.

Yesterday’s winner and third in the championship, Jake Dennis, will start mid-pack in P17 as he got to experience the joys of group 1 qualifying while the top two on the championship table, Bird and da Costa, will be P21 and P22.

Da Costa said that Techeetah were focusing too much on the race and didn’t prepare enough for qualifying, and as such are hoping for rain and chaos to help them make something of the race.