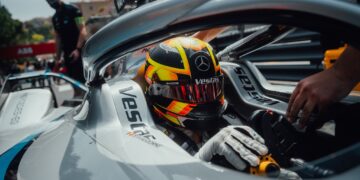 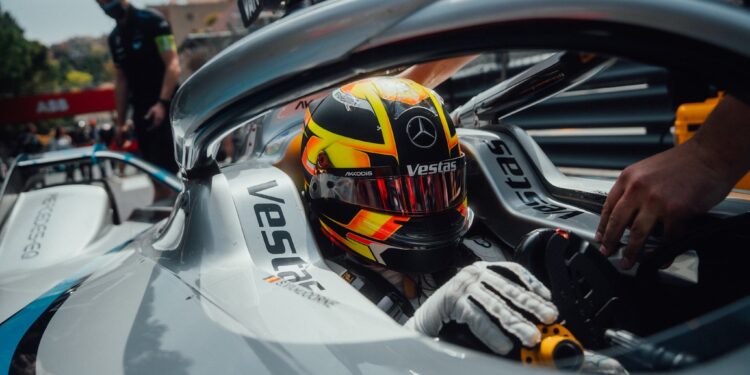 Monaco E-Prix – Stoffel Vandoorne put Mercedes on top in Monaco, beating Jaguar and Techeetah, as the both Porsches retired within a few laps of each other.

After putting in some incredible laps to see him through the duels and onto pole position, Mitch Evans will be looking to continue his winning streak from Rome and not only his third win in a row, but his first Monaco victory.

The Jaguar racer was joined on the front row by Pascal Wehrlein but it was the Kiwi who held his lead into the first corner. Things weren’t so smooth going for Evans’ teammate, Sam Bird started P13 after a grid penalty was applied and he fell further back to P17 on the opening lap. While there were quite a few side-by-sides and some coming togethers over the course of the first few laps, all cars were intact and still in contention.

It was a very calm start to the E-Prix, Evans however not managing to pull more than half a second ahead of the Porsche behind. The first attempt on the lead came just before the fifteen minute mark as Wehrlein went side-by-side with Evans on the run from the tunnel towards the Nouvelle Chicane. The Jaguar held position, but wasn’t overly happy after hearing that he had slightly less energy than the driver behind.

As that was happening it was game over for Bird as his Jaguar broke a wishbone and he slowly made his way back to the pits to retire. Third placed Jean-Eric Vergne was the first of the top drivers to active Attack Mode, which is once again in the traditional form of two activations for four minutes each, while he initially fell back, he was able to use the extra energy to take the lead when Evans and Wehrlein activated theirs.

After the first boost periods were ending it was Wehrlein who had the advantage. The Porsche driver had almost a second advantage but it wasn’t to last as the German started to slow, falling to the back of the pack.

Vergne retook the lead then activated his second Attack Mode, which dropped him back to P3 but as that happened, Wehrlein’s car stopped at the exit of the tunnel which brought out the Full Course Yellow leaving the Techeetah driver with only a few seconds of his power boost left to use when the track was back to green.

At the front, Vandoorne had extended his lead to nearly three and a half seconds during the FCY period, the Mercedes driver activated his second Attack Mode as the race resumed but then not only did he lose the change to use it, his lead was also removed when the Safety Car was brought out to allow the marshals recover Andre Lotterer’s Porsche which had speared into the barriers at Sainte Devote.

Lotterer had been battling with Oliver Rowland and the two hit the wall there, the Porsche stopping there while the Mahindra made it further around the circuit before calling it a day. That meant it was both Porsche’s out within a couple of minutes while Evans, in P2, was the only one of the top three to have an Attach Mode left to use in the race.

Robin Frijns, who had been one of the first of the points runners to take Attack mode, activated his second after the Safety Car came in, the Envision driver briefly made it into the podium places when Evans went off-line to activate his final power boost, and the Jaguar racer then had just over two minutes to try made the most of it.

It took a few tries to get past Vergne but the Mercedes was just too far ahead and Evans returned to normal power in P2, and over a 1.5 seconds adrift of the leader. Thanks to the Safety Car and Full Course Yellow periods, there were 4:30 minutes added to the race time.

While Vandoorne and Evans each had some breathing space behind them, Vergne had both Frijns and his teammate, Antonio Felix da Costa on his tail looking to snatch the final podium place from the Frenchman.

Vergne managed to hold onto the podium but with Vandoorne taking the victory, the delighted Belgian will also take the lead of the championship away from the Techeetah driver. Evans took P2 after having struggled with energy compared to his competitors, the Jaguar driver’s search for a Monaco win will have to continue.

Frijns took P4 ahead of da Costa while Lucas di Grassi in P6 was the only Venturi car to finish their home race after Edoardo Mortara retired to the pits after having set quite a quick lap, with the fastest first sector of the race.

Nick Cassidy made it two Envisions in the points with a P7 finish just ahead of Nissan’s Sebastien Buemi, who had started the Monaco race in last place. Jake Dennis was P9 for Andretti while Nyck de Vries’ P10 meant that Mercedes bookended the points places.

Maximilian Guenther in the second Nissan e.dams had been running in a solid points position but ran out of energy and fell to the back on the final lap.