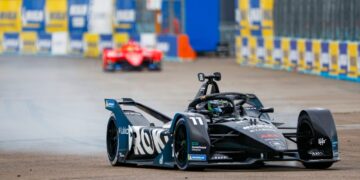 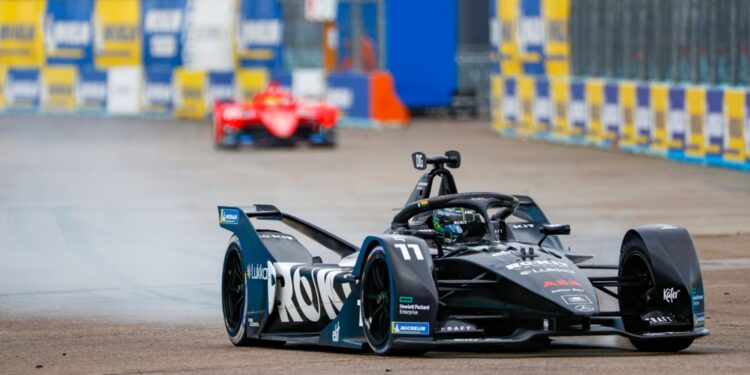 Berlin E-Prix 2 – ROKiT Venturi certainly seemed to be continuing their momentum from yesterday, leading both practice sessions on day 2.

Day two in Berlin started with slightly cool, but gloriously sunny weather. Overnight, the track has been adjusted so that today’s track action could be run in the reverse direction. Sebastien Buemi didn’t have a great start to his day however, the Nissan racer seemingly losing the rear at the start of the session which ended with a lot of smoke and advertising banner all over the rear of Buemi’s car. He returned to the pits for repairs and that lost him half the session.

The Swiss driver then had a bit of a spin at the hairpin when he did make his return to the track and ended the session in P21, 1.420 seconds slower than Edoardo Mortara. Yesterday’s winner put in a 1:06.373 in the first practice session, just over half a tenth faster than the Porsche of Andre Lotterer.

In the second practice it was Mahindra’s Oliver Rowland at the top of the times for the majority of the session, just a few hundredths off the best of FP1, with a 1:06.400. Just before the ten minute mark it was the two Venturis who beat the earlier time and jumped to the top of the charts with Lucas di Grassi’s 1:06.133, 0.153 seconds faster than Mortara’s effort.

There weren’t too many late fast laps being posted at the end of the session so when the chequered flag waved it was the Venturis who still sat on the top of the charts. Rowland ended FP2 in P3 with yesterday’s final podium finisher, Stoffel Vandoorne in P4 with a 1:06.458.

Pascal Wehrlein in P5 was the only Porsche in the top ten times in second practice however Lotterer’s time from the opening session was the overall fifth fastest time set on the reverse layout so far today.

Avalanche Andretti’s Jake Dennis is looking on the pace, ending FP1 in P3 and then FP2 in P6, just 0.338 seconds off di Grassi’s time. Both DS Techeetah’s were in the top ten with Jean-Eric Vergne P7 and Antonio Felix da Costa P10.

After a pretty forgettable day yesterday, Envision will be hoping to reverse their fortunes and Robin Frijns’ P8 with a 1:06.490 was a sign that perhaps the might be able to. P9 was Oliver Turvey with a very good lap for NIO 333.

As with yesterday there was not much to separate the field with the top ten covered by 0.389 seconds, and given di Grassi had a 0.153 gap back to Mortara in P2, that meant there was less than two and a half tenths covering P2-P10.

After the messy practice one, Buemi’s day hadn’t seemed to improve with the Nissan driver ending FP2 last, almost half a second slower than the driver in P21. The Swiss wasn’t alone in having a bad session however, as the two Jaguar TCS cars were well down the pack, Mitch Evans in P19 with a 1:06.788 and Sam Bird P21 with a 1:06.929.