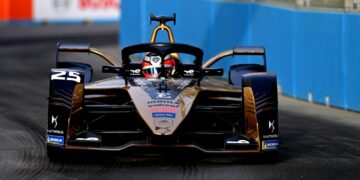 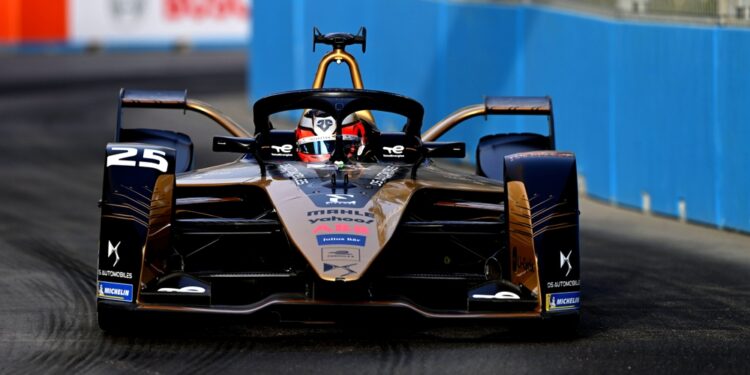 After a two month break, Formula E cars are back on track today, having two practice sessions this morning ahead of qualifying for the Rome E-Prix. Oliver Rowland was giving it everything in both sessions with multiple, dramatic out of shape moments and trips to the run-off areas over the two practices.

The Mahindra driver was also involved in an incident with Jean-Eric Vergne at the end of the first practice session. The Techeetah driver was on a fast lap, and had just posted the quickest first sector, when he went to pass Rowland at the chicane. Rowland obviously hadn’t seen or been warned that there was a fast car approaching and the two headed into the chicane side-by-side, but as the track is quite narrow there, there wasn’t space for the both of them and the Mahindra ended up nose first in the wall.

The British driver was able to reverse his car out and after reporting to his team that all felt fine, he went on to complete his practice start in a front wing-less Mahindra. The stewards investigated the collision but decided to take no further action as they felt neither driver was wholly to blame.

Rowland wasn’t the only driver in a red car to bring drama to the streets of Rome this morning, Andretti’s Jake Dennis had to bail out of a fast lap when he locked up at the chicane in FP1 and in FP2 he slightly knocked his steering out of alignment after tapping the rear left on the wall at the chicane exit.

Robin Frijns, always one to watch for drama, had his own moment during FP2, doing a 180 after turn 10 and then executing a stylish spin back to continue the session. A few minutes later and the red flag was flying in Rome as Andre Lotterer whacked the inside wall at the chicane and had to stop on track with a broken Porsche.

He wasn’t the only one to come to grief at the chicane as Andretti’s Oliver Askew had done the exact same thing a few seconds earlier. While the Porsche retired on track, the Andretti, who Lotterer stopped just in front of, was able to limp back to the pitlane.

Askew makes it back round to the pits with Lotterer pulling off to the side of the track.

The session resumed with nine minutes left and it was the reigning champion, Nyck de Vries, who was top of the times with a 1:39.368 at that point while the current championship leader, Edoardo Mortara, was a couple of tenths further back in P2.

The final few minutes saw a flurry of both quick laps and mistakes but it was the series’ only multiple champion, who came out on top in the end with a 1:39.082. Pascal Wehrlein, winner at the Mexico City E-Prix last time out, was 0.171 seconds behind in the sole Porsche to take the chequered flag in the session.

Sam Bird, winner of the first ever Rome E-Prix, slotted into P3 for Jaguar with Andretti’s Dennis just behind him. De Vries finished in P5, ahead of the second Jaguar of Mitch Evans. Antonio Felix da Costa was P7, 0.415 seconds off Vergne’s time while Mortara, the fastest driver in FP1, was P8.

Stoffel Vandoorne and Envision’s Frijns rounded out the top ten as the last of the drivers to post times within a second of the leading Techeetah.