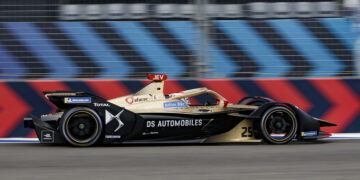 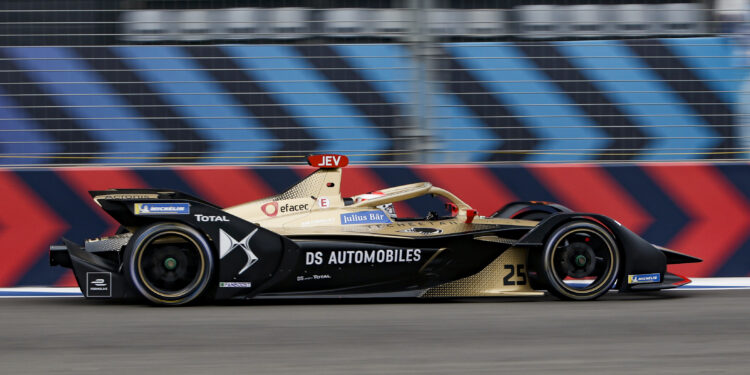 Whereas yesterday’s FP1 was run under blue skies and sunshine, the second practice was greeted with much cooler temperatures as the day started cloudy and overcast. There wasn’t a huge rush out of the pits at the start as is usually seen, though with only half an hour of track time before qualifying, they didn’t remain in the pits for too long.

The last driver to start their first timed lap was Alexander Sims and after setting the fastest first sector of the session, his Mahindra ended up in the wall and the Red Flag was brought out after only 6 minutes of FP2 had passed. At the end of the session Sims was overheard telling Antonio Felix da Costa that he felt the rear of his car stepping out and so he aimed the nose of his Mahindra at the wall to avoid taking an impact to the rear where all the vital components are.

Due to the delay, and with such limited practice time, the Race Director added an additional five minutes to the session so there will have only been three minutes of FP2 time lost. When the Red Flag had been brought out Mitch Evans was top of the times with a 1:19.338, just over half a tenth ahead of reigning champion Nyck de Vries.

However, once the cars got back out, the times were quickly brought down with de Vries the first to get into the 1:17s but it was the Techeetahs who took control of the timesheets with da Costa setting a 1:17.610 with Jean-Eric Vergne just 0.056 seconds slower.

With eight minutes on the clock Pascal Wehrlein brought the top time down to a 1:17.518 but a couple of minutes later and Evans had managed to retake control of the timesheets with a 1:17.440 in his Jaguar. However the final few minutes went the Techeetah drivers way as the two gold cars jumped back to the top, this time with Vergne ahead of da Costa.

While the end of FP1 saw a slightly dramatic coming together between de Vries and Sebastien Buemi at the final corner leaving the Nissan’s front wing abandoned near the pit entry (there full circumstances of the incident unknown as the cameras hadn’t caught it). FP2 meanwhile had a much more mundane reason, with Dragon/Penske’s Sergio Sette Camara having gone into the runoff at T7, and then had to wait for the rest of the cars to pass before rejoining the track.

Wehrlein was the only Tag Heuer Porsche in the top ten, his time just 0.240 off of Vergne’s best, while Buemi’s 1:17.656 saw him in P6 as the only Nissan e.dams represented in the top portion of the grid. Sette Camara slotted into P7 while Oliver Askew was the best of the Andretti’s with a 1:17.839 in P8.

Sam Bird saw to it that the big cat teams, Techeetah and Jaguar were the only two with both cars represented in the top ten, the British driver’s 1:17.902 good enough for P9 while Lucas di Grassi was 0.003 seconds behind in P10.

Di Grassi’s teammate, Edoardo Mortara, who was fastest in FP1 yesterday evening could only manage a 1:18.117 to see him end in P16 in the second session, while Jake Dennis, who missed the opening session due to a power unit issue, took P17 a few hundredths behind the Venturi driver today.