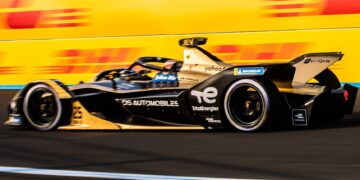 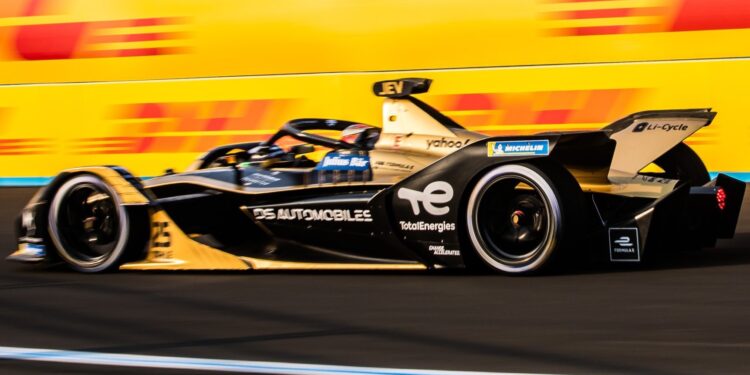 Once again Sergio Sette Camara was the first to emerge when qualifying got underway, the Dragon racer having a clear track for the opening few minutes but while he put in solid times in sectors one and two, he backed off in the final one end with a 1:19.

Just as the field were setting their first times, Robin Frijns got on a bump and had a big lockup, the Envision driver was also shown to have stopped on track with some advertising hanging off his car before he returned to the pits. That however meant he failed to get a time on the board before the halfway point of the session, which is mandatory, so he ended his session as the others started heading back to the circuit for their final runs.

At that point Jake Dennis was holding the top of the times with a 1:09.121, while Jean-Eric Vergne, the fastest in practice by some margin, Nick Cassidy and Stoffel Vandoorne were provisionally holding the duel qualification places.

As usual at the end of the group stages, the leaderboard was ever changing but it was Vandoorne who finished fastest with a 1:08.829, ahead of Vergne, Dennis and Sebastien Buemi. The Nissan e.dams driver putting an end to Andre Lotterer’s record of making it through to every duel quarter-final.

As his teammate did, Antonio Giovinazzi was the first of the group B drivers to take to the track but it was Oliver Turvey who set the first competitive time with a 1:10.041, though that was quickly overwhelmed and it was Antonio Felix da Costa’s 1:08.715 which took the P1 spot after everyone had put their first time on the board.

The track went quiet then and as it did, Edoardo Mortara, Pascal Wehrlein and Oliver Rowland were the others in the duel positions before the final flurry. As they headed back to the track, Alexander Sims was first out, well ahead of his teammate while Nyck de Vries, Mortara, Giovinazzi and Dan Ticktum were in a train at the back and it was too far back for the NIO 333 driver who missed out on crossing the line before the chequered flag emerged.

Da Costa’s earlier time wasn’t beaten or improved upon though Mortara gave it a go, the Venturi driver improving to a 1:08.716 to take P2 with Wehrlein and Mitch Evans over two and a half tenths back in the other qualifying places, while reigning champion de Vries just missed out by 0.033 seconds.

After the great showing from the NIO 333s and Giovinazzi in FP2, that unfortunately didn’t translate to qualifying with Oliver Turvey finishing just ahead of his teammate while the Dragon/Penske

Evans first on track and over four tenths up in sector 1, the two set very similar second sectors after a twitch from the Jaguar. Sector 3 again, very similar times, but while the Mercedes was slightly quicker, he couldn’t close the early gap and the Jaguar will progress.

There was barely anything between the two drivers in the second quarter final, but it was the Techeetah who won the duel, by just over a tenth. The third of the quarters was also quite close but, as he did in Berlin, Mortara just continued extending his advantage to see him into the semi-finals.

The fourth of the opening round of duels was all da Costa, the Techeetah driver almost two tenths up in the first sector, and continued pulling the advantage while a mistake for Buemi made any chance of a comeback for the Nissan impossible.

The first of the semi-finals saw Vergne with less than a tenth of an advantage over Evans, the Frenchman managed to double that through the second sector and the Techeetah was the better of the two through the last sector to end it with exactly 3 tenths separating the duelists.

A big slide for Mortara in the early part of the lap which didn’t help his chances against the other on-form Techeetah, and while da Costa did make a slight mistake on his own lap, it didn’t given the Venturi driver a chance to fight back, so the final will be fought between the two Techeetahs.

A bit of a messy lap from the start for da Costa which made it hard for him to put a time to compete with his teammate and it seemed the Portuguese driver did back off in the final sector when he knew that the pole was out of his grasp, and so Vergne will be on pole for the first time the series races around Jakarta.

Evans will start ahead of Mortara on the second row, while Dennis will be in P5 ahead of Buemi and Vandoorne. Wehrlein would have been in P6 but had a 5 place grid penalty after the Porsche team had to open his DCDC to make a slight repair. Lotterer will line up in P8 while de Vries and Lucas di Grassi will start from the fifth row.