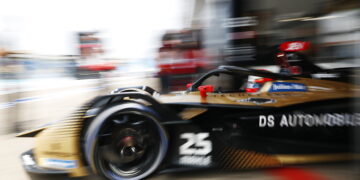 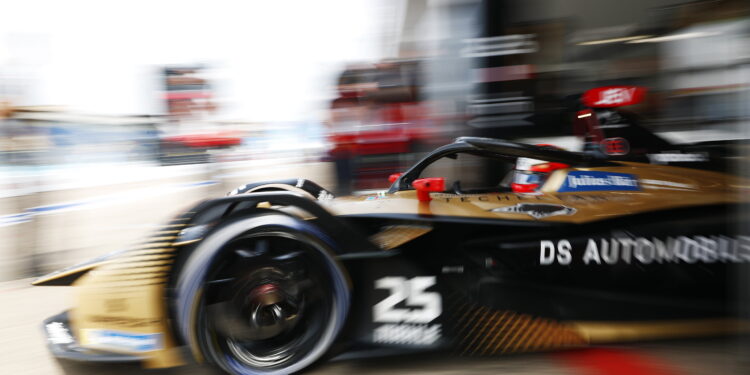 Berlin E-Prix 1 – Jean-Eric Vergne took all the qualifying points topping both group qualifying and Super Pole, and will start with his teammate in P2.

Group one was surprisingly cordial compared to some of the chaos seen at some other tracks. While Antonio Felix da Costa, Robin Frijns and Nyck de Vries were all out at the same time, the other three drivers gave themselves good gaps for their laps. Fastest man in both practice sessions, Jake Dennis, decided against a preparation lap and was the first to put in his qualifying time.

The BMW driver did catch up to the back of the da Costa, Frijns, de Vries train in the final sector, Dennis said he did lose time behind the Mercedes and was disappointed the stewards decided not to give a penalty to de Vries for impeding, however the British driver did end with the second best time, just over a tenth slower than da Costa’s 1:06.486.

Robin Frijns made a mistake in the final sector, locking up and going slightly onto the marbles at the final corner which saw him slowest of the group and the only driver in the 1:07s. Sam Bird went P3 but the Jaguar driver will have a three-place grid drop from a collision in London.

Group two saw Pascal Wehrlein head out first but the Porsche driver didn’t seem to have the easiest car to drive and took the provisional final Super Pole spot. Jean-Eric Vergne kept DS Techeetah on top, going nearly two and a half tenths quicker than his teammate’s G1 effort with a 1:06.239. Edoardo Mortara put his Rockit Venturi into P2 0.187 seconds behind Vergne while Mitch Evans went P4. Rene Rast and Nick Cassidy didn’t make it into the best six times and went P7 and P8.

Group three saw the sun come out and the times much slower overall than the previous efforts. Maximilian Guenther was the first to set a time, the BMW driver giving the wall a slight tap but couldn’t get into the top six and ended P8. The best of the group was Audi Sport Abt Schaeffler’s Lucas di Grassi who ended P4, 0.316 behind Vergne.

It was a dreadful lap for Stoffel Vandoorne as the Mercedes driver couldn’t even match his teammate’s G1 time and was the second driver to fail to post a 1:06 lap, he’ll start just ahead of Robin Frijns. Oliver Rowland went P9, while Andre Lotterer and Alex Sims were only P13 and P14.

The final group saw Sebastien Buemi put in the fastest sector one for Nissan e.dams and into P5 while Norman Nato was the best in the final sector and slotted in ahead of his teammate to put both Venturi’s into Super Pole. The rest of the group didn’t have as spectacular a time with Tom Blomqvist slotting into P17 ahead of Sergio Sette Camara, Oliver Turvey went P20 while Joel Eriksson went slowest of all, the only driver not within a second of Vergne’s time.

That meant, Vergne, Nato, Mortara, da Costa, Buemi and di Grassi were the ones to head to the pole shootout. Di Grassi was first out and went quicker than his group qualifying time to put in a benchmark time of 1:06.427. Nissan were next out but Buemi couldn’t put together as smooth a lap as the Audi driver and ended with a time over half a second slower.

The reigning champion and only driver to get through to Super Pole from the first group, da Costa, put in a very clean lap to go fastest in all sectors and put it on provisional pole with a 1:06.300.

Fourth up was Mortara and while the Venturi driver was quicker than di Grassi in the third sector, it wasn’t by enough and the Swiss driver went into provisional P3 with two drivers left to run.

The other Venturi of Nato was the penultimate contender and while the Frenchman had been looking decent, a mistake in the final sector lost him time and left him behind his teammate. Last one out was Vergne, the double-champion just off the pace in the first sector but got into the rhythm after and posted the best second and third sectors to take pole and all the qualifying points.

Mitch Evans will start from P7 with fourth in the championship, Dennis, alongside in P8. The fifth row will see Wehrlein line up alongside Guenther. After his grid penalty, Bird will start P15 while his other closest title contenders, de Vries and Frijns will be behind in P19 and P23.