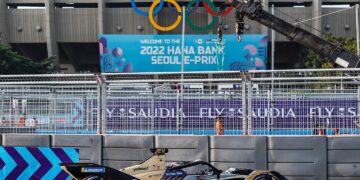 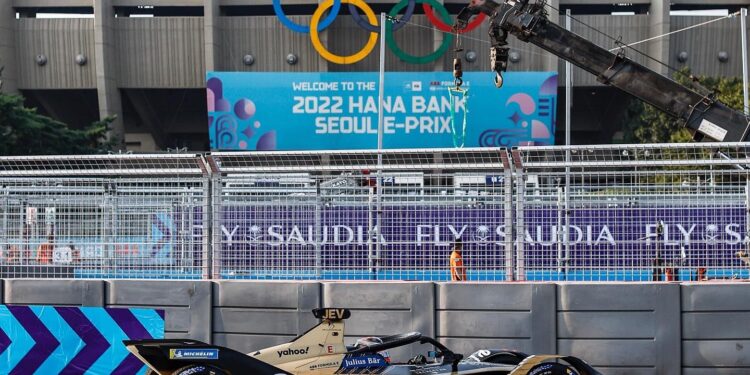 Seoul E-Prix 1 – Jean-Eric Vergne set the pace in practice ahead of the penultimate round, just beating out championship rival Edoardo Mortara in FP2.

With rain forecast for later in the day, the practice sessions become even more important as the results could potentially set the grid for the race if qualifying ended up being a washout.

The Mercedes racers were the first to put times on the board in the second session with Stoffel Vandoorne putting in a 1:23.076, just over a second off his best, which was the fastest FP1 time, in the opening session, a 1:22.000.

The championship leader’s time was beaten just before the first ten minutes of the session passed with Pascal Wehrlein, in the special edition black/blue Porsche livery this weekend to promote a new Tag Heuer watch, the first under eighty two seconds with a 1:21.723.

The two Venturi drivers then took over at the top of the times with Mortara putting in a 1:21.269 while Lucas di Grassi, who yesterday announced his move to Mahindra, just less than four tenths behind.

In the final ten minutes there was a close call between Mortara and Sam Bird’s replacement for the weekend, Norman Nato. Mortara came around a corner to come across the slow moving Jaguar and got a bit out of shape as he swerved to avoid going into Nato’s rear.

With only a handful of minutes on the clock Alexander Sims stopped on track between T21 and T22 after hitting the wall. The Race Director decided to leave him there under Yellow Flags for the last few minutes which meant that faster times could not be set but after Nick Cassidy ground to a halt on circuit the Red Flag was brought out to cut the session slightly short.

There were a few incidents in the first practice too, firstly Vandoorne and Mortara halfway through the session where the championship leader locked up and nearly went into the back of the Venturi when the Swiss slowed after failing to overtake Sebastien Buemi.

Then Mitch Evans had a big slide at T19 almost going into the barriers at the exit of the corner but managed to control the car which was well appreciated by the crowd and commentators.

Finally, Buemi and Mortara were involved in another incident in the final few minutes of the session where the Venturi went to overtake down the inside but whether Buemi didn’t see or just wasn’t up for it, he closed the door on his countryman.

Oliver Turvey ended in P7 just over a half a second off the leader while Sergio Sette Camara, who took Dragon’s first points of the season at the last race in London in P8. The top ten was rounded out by Antonio Felix da Costa and Jake Dennis.

That's one way to get around the streets of Seoul, @mitchevans_ 😆⚡️