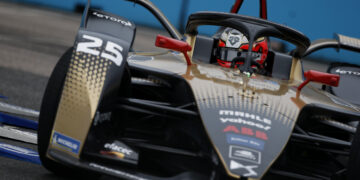 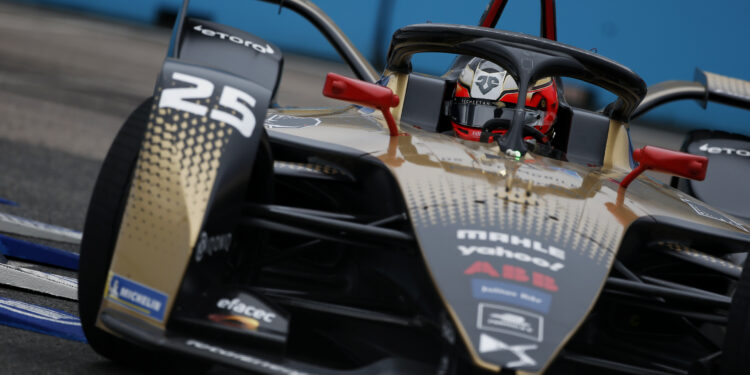 London E-Prix – Jean-Eric Vergne topped the opening practice session at the ExCeL London as Formula E returned to the city for the first time in five years.

Vergne’s lap, a 1:21.650, came in the closing stages of the practice session when the majority of drivers started putting in full power laps. The top five all set very close laps times which saw them all end within a tenth of each other when the chequered flag came out.

The driver who got closest to the DS Techeetah driver’s time was Robin Frijns, the Dutchman just missing out by 0.004 seconds in his Envision Virgin car. Current championship leader, Sam Bird, was third 0.038 behind Vergne while the second Techeetah, of Antonio Felix da Costa, was fourth just less than three hundredths off the Jaguar.

The final driver to get within a tenth of Vergne was Mitch Evans in the other Jaguar, with a 1:21.746. Alex Lynn took the honour of being the quickest of the Mahindra drivers, Lynn’s 1:21.794 seeing him into sixth.

Pascal Wehrlein, posting a 1:21.937, was sandwiched between the two Mercedes EQ drivers in eighth with Stoffel Vandoorne over a tenth ahead and while Nyck de Vries was just a couple of hundredths off the Porsche.

The top ten was rounded out by Dragon/Penske Autosport’s Sergio Sette Camara who was the first driver to miss out on posting a sub-82 second lap with a 1:22.038. The session overall ran without interruption, aside from the scheduled Full Course Yellow check near the start of it, with a few slides and lock-ups but no apparent damage or wall contact.