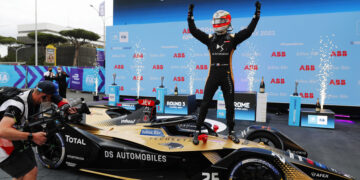 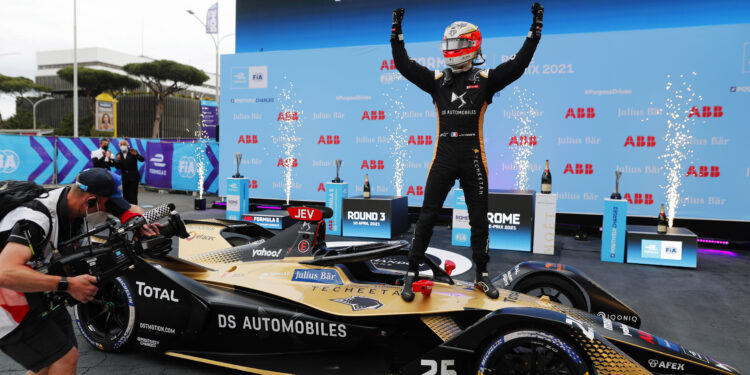 Rome E-Prix 1 – Techeetah’s Jean-Eric Vergne wins ahead of the two Jaguars in a Rome race bookended by the Safety Car.

The Mini Electric Pacesetter led the pack away as the race started under safety car conditions as the track was wet in parts. The Mini led them around the first lap to give the drivers a chance to feel out the conditions before pulling into the pits and getting the race underway with 39 minutes plus 1 lap of the race left.

As the track went green, the top two of Stoffel Vandoorne and Andre Lotterer pulled a gap to the rest before the Porsche driver made a move for the lead. The two cars and the inside of the corner can’t all fit into the same space so the Mercedes driver has to go into the run off area while Lotterer gets caught on the outside wall, the two drop back to 7th and 13th.

Oliver Rowland then took over the lead with di Grassi and Vergne behind however, the Nissan e.dams driver was under investigation for power overuse and a few laps later was handed a drive through penalty and he fell to the back as a result.

The lead was then inherited by di Grassi and, as Attack Mode was taken, the lead flipped between the Audi, Techeetah and Nyck de Vries’ Mercedes. With just over five minutes to go di Grassi moved back into the lead before he lost drive and started slowing. The two Mercedes had been line astern fighting for fifth, Vandoorne moved to avoid the slow-moving Audi and hit a manhole cover, knocking the Belgian into the wall when his teammate hit into the back of him.

That meant the Mini Electric Pacesetter was brought back out but the circuit couldn’t be cleared in time so the Safety Car was the first to take the chequered flag.

Starting 10th and 12th, the two Jaguar’s of Sam Bird and Mitch Evans, the previous winners of the race, had steadily made their way towards the front both through some great overtakes and taking advantage of other bad luck. The scene of Jaguar’s first win, in 2019, has now also become their most successful team effort as they took their first double podium.

Alex Lynn in eighth was the sole remaining Mahindra after Sims got caught up in the Vandoorne/Lotterer incident and had to retire from the resulting damage. The final point positions went to BMW’s Maximilian Guenther and Virgin’s Nick Cassidy, while the fastest lap point went to Evans for his 1:42.387 effort.