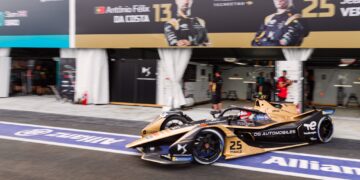 Vergne well ahead in Jakarta practice

Vergne well ahead in Jakarta practice 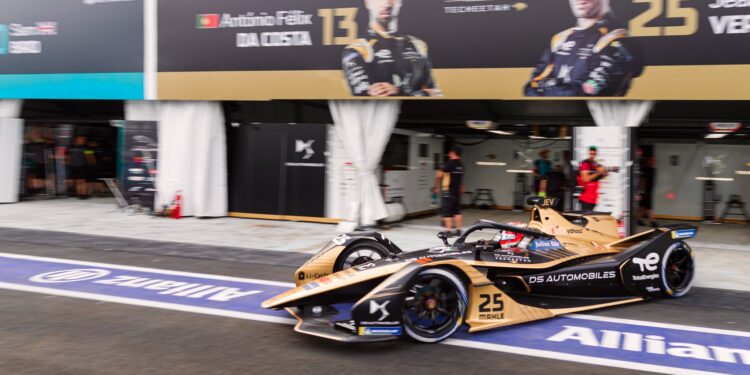 Jakarta E-Prix – Techeetah looking very strong in Jakarta as Vergne and da Costa topped the timesheets in practice, well ahead of their rivals.

Formula E’s first sessions at the Jakarta circuit were full of dust and humid heat with the temperatures starting in the late 20s in the morning and just going up from there. The first session ended with a late lap from Oliver Rowland topping the times with a 1:08.433, the second session started with traffic chaos as all the drivers were putting in their opening times, but they weren’t far off Rowland’s FP1 best with Stoffel Vandoorne’s 1:08.607 the quickest of the first runs.

With just over ten minutes of the second session run, Porsche jumped to the top of the timesheets, with a new fastest time seen on the circuit, a 1:08.410 set by Pascal Wehrlein despite almost going into the wall at the final corner.

That time didn’t hold the record for long however as the NIO 333 team took over at the top with first Oliver Turvey getting into the 1:08.3s before his teammate, Dan Ticktum, shaved a few hundredths off with a 1:08.338.

In the final ten minutes of the practice Jake Dennis slid in ahead of the NIO 333s and was looking set to head into qualifying having the best time but the Techeetahs had left their best for last with first Antonio Felix da Costa just getting into the 1:07s despite a lock up near the end of his lap but it was Formula E’s only double champion how ended on top with a huge lap to set a 1:07.594.

The Frenchman was four tenths ahead of his teammate and over six and a half quicker than Dennis, so they are looking to be very strong contenders for the duels and pole later.

Mitch Evans ended the session in P4 with a 1:08.268 while Berlin’s double polesitter, Edoardo Mortara was in P5. After their chart topping times earlier in the session, the NIO 333s ended P6 and P7, while Wehrlein was P8.

Antonio Giovinazzi put in a great lap in his Dragon/Penske, his 1:08.526 had seen him up into P5 when he posted it a few minutes before the end of the session, earning him great praise over the radio from his boss, Jay Penske. The Italian ended practice in P9 while Stoffel Vandoorne rounded out the top ten, the current championship leader 0.940 off Vergne’s time.

There was a bit of a close call between da Costa and de Vries near the end of practice one when the Techeetah driver was moving to pass the Mercedes, neither were overly happy afterwards but quick reflexes meant there was no actual contact.

.@afelixdacosta and @nyckdevries keeping us on the edge of our seats at the end of FP1 😳