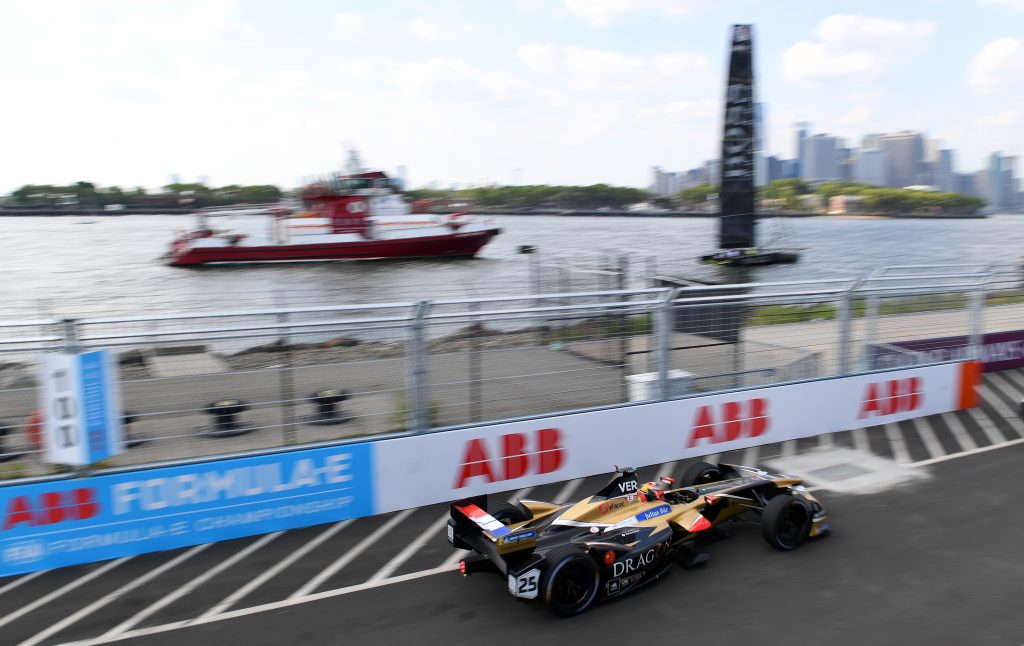 Vergne got an almighty start from third on the grid, passing his team-mate Andre Lotterer and cutting across him to dive up the inside of polesitter Sebastien Buemi into the first corner.

Both Techeetahs were investigated for a jump start, however. While Vergne escaped without penalty, Lotterer was given a 10-second stop/go penalty.

Shortly after he came into the serve the penalty, Lucas di Grassi passed Buemi for second on lap 12 of 43, having jumped his team-mate Daniel Abt off the line.

Vergne and di Grassi both pitted on lap 23, coming out nose-to-tail. The Audi driver hounded Vergne to the finish line, with di Grassi even pushing him through the final corner at one point.

Vergne hanged on to the lead to deny di Grassi a double New York victory, but the outgoing champion claimed second in the driver’s championship.

Abt claimed third after dicing with Buemi, taking third away from the Renault e.dams driver on lap 19 into Turn 11.

Buemi used his FanBoost after the pit stop to reclaim the podium place, but a mistake three laps later at Turn 2 put Abt on his tail and gave him an opportunity to repass into the new Dock Loop section, and held the position to the line despite stopping a lap earlier than his rivals.

Lotterer recovered to ninth, but Audi scored enough points to leapfrog Techeetah in the team’s standings to claim the title.

Felix Rosenqvist was fifth for Mahindra. He picked up two places at the start, then passed Nelson Piquet Jr. into the final corner for sixth. He then jumped Mitch Evans in the pit stops to get fifth.

Evans finished sixth ahead of Piquet who battled with Nick Heidfeld who finished eighth, which was enough to keep Mahindra ahead of Renault e.dams for fourth in the team’s championship. Sam Bird scored the last point in 10th.

Antonio Felix da Costa took a gearbox penalty and a 10-second time penalty before the race started, but picked up an additional 10-second stop/go for causing a collision with NIO’s Luca Filippi, who tried to pass the Andretti driver into Turn 11 but was cut off on the straight. His front wing and front-right wheel was broken, and he collected Dragon’s Jerome D’Ambrosio as a result.

The second Dragon of Jose Maria Lopez also retired after suffering a suspension failure over the kerb at Turn 12, the same issue he had during Saturday’s first practice session. This meant Dragon was unable to usurp NIO for eighth in the standings.

Venturi suffered a double retirement, with Tom Dillmann going out with a transmission issue, while Maro Engel lost power.