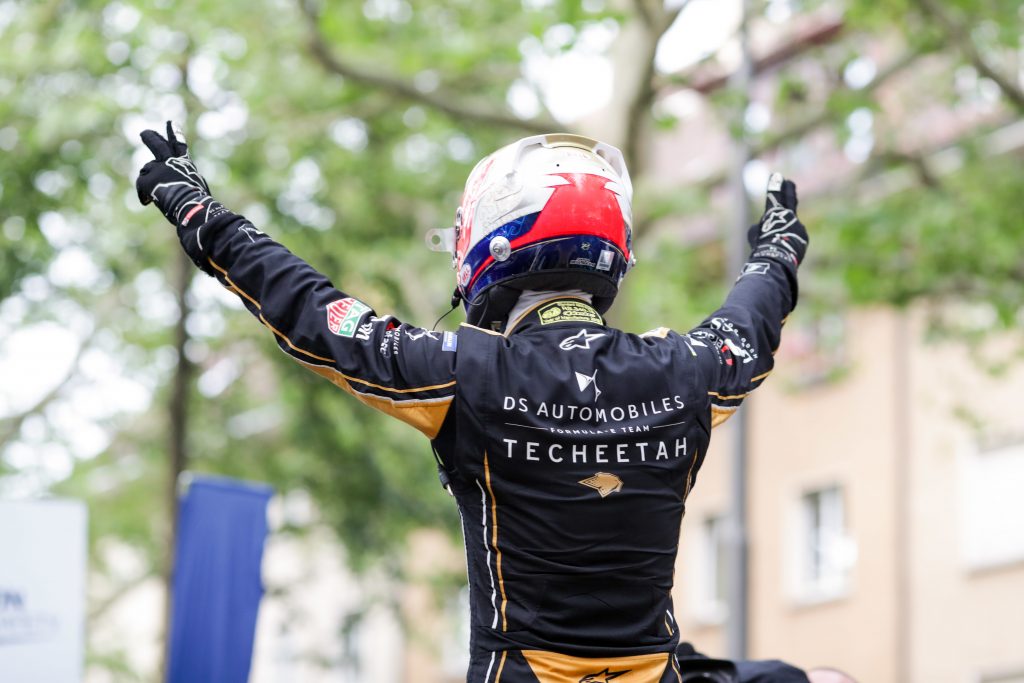 Starting from pole Vergne did not have an easy run to the finish as he was challenged the whole way by the Panasonic Jaguar of Mitch Evans. The race was red flagged on the first lap after Pascal Wehrlein got squeezed by Sebastien Buemi at the chicane leaving the Mahindra to block the track for most of the drivers behind him.

However not all drivers got stuck, the ones further back were able to see the situation and find their way through the escape road as an alternative route to the blocked area. Once those drivers heard the Race Director’s decision to restart the race behind the safety car in grid order, and not how they were positioned as the race was halted, there was much dissention in the ranks. No matter their arguments though, the race restarted with 21 cars as Wehrlein’s had been fixed but Robin Frijns was out after being hit and damaging his driveshaft.

Despite admitting to being the slower of the two lead cars, Vergne managed to weather all Evans’ attempts to pass and even had to survive a downpour over the last two laps to secure his third victory of the season and extend his lead in the championship.

Evans was happy to be back on the podium but believed the lack of time loss when going through the Attack Mode activation zone played an important role in keeping the Techeetah ahead and ultimately taking win.

Finishing out the podium places was Sebastien Buemi but this being his home race, he said that his third felt like a win. Despite never being too far from the top two, the Swiss only really joined the fight when the rain arrived but by that point they were all mainly focused on securing their positions than risking it with an attack.

Starting from sixth Sam Bird picked up a puncture during the first lap chaos but things went his way as he managed to get his car back to the pits while the race was red flagged and was then able to line back up in sixth for the restart. The Envision Virgin Racing driver had made it to fourth half way through the race but locked up when defending against Andre Lotterer and lost the position. Bird took the chequered flag in fifth and collected the point for fastest lap in the top 10 however a post race penalty for Lotterer promoted him back to fourth but the Brit is now out of the championship fight.

It was a fantastic performance again by Maximilian Guenther, his second Super Pole appearance ended with the young German equalling his best result in Formula E and bringing another fifth place finish home to the Dragon Racing team. Guenther was right behind Wehrlein when the Mahindra ended up blocking the track and would’ve been right at the back of the pack had the cars restarted in the order they were when the red flag was shown.

For the second race in a row Daniel Abt has lined his Audi Sport Abt Schaeffler up in seventh, just missing out on a chance to try for Super Pole, for the start of the race and has brought it home in sixth.

Jaguar’s midseason replacement driver Alex Lynn had a pretty uneventful time of it during the race but a seventh place means more valuable points for the Jaguar team.

Eighth and ninth went to Felipe Massa and Lucas di Grassi the two Brazilians were amongst the drivers who would’ve gained the most had the race not restarted in grid order and as such were very vocal about why it shouldn’t happen that way during the red flag period. Coming from 19th after a dismal qualifying di Grassi fought up through the field to take a couple of points.

Finishing out the point scoring positions was HWA Racelab’s Stoffel Vandoorne which means that the rookie team are one of only three teams, the others being Techeetah and Nissan, to have scored points in each of the European races.

The non-finishers in the Swiss E-Prix were Robin Frijns whose race ended on the opening lap when a hit from d’Ambrosio damaged his rear suspension. The other Swiss driver, Edoardo Mortara, retired after a collision while Pascal Wehrlein’s Mahindra shut down while he was running fourth. The final retirement was Oliver Rowland whose Nissan had enough after a coming together with a wall.

Post-race decisions: Andre Lotterer was given a drive through penalty converted to 22 seconds for exiting the pit lane while the light was red, that dropped him from fourth to 14th. Antonio Felix da Costa had five seconds added to his race time for speeding under Full Course Yellow conditions. Edoardo Mortara will have a five place grid penalty in New York for causing a collision with Alex Sims, while Jose Maria Lopez was disqualified after his Dragon was found to have used more than the regulated 200kW of power.

With the final European round of the season comes the end of the inaugural voestalpine European Races championship. The trophy was awarded to Jean-Eric Vergne after the post-race press conference as he has been the most successful driver with two wins and a third place in the last three of the five relevant E-Prix.