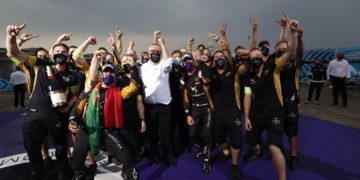 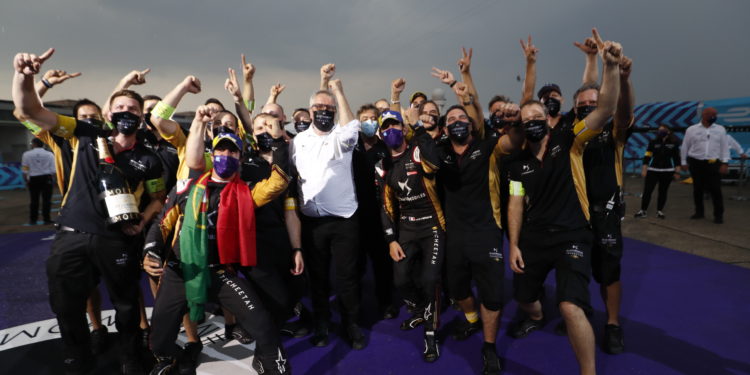 Jean-Eric Vergne returned to winning ways as both the Drivers’ and Teams’ titles were decided at race four of six in the Berlin finale races.

With two races still to run the championship titles have been decided, Antonio Felix da Costa has won his first ABB FIA Formula E Championship when he followed Vergne home for a team one, two to celebrate his achievement and the DS Techeetah team’s second straight Teams’ Championship.

The drama started even before the race started as Robin Frijns’s Envision Virgin Racing car was sat in the garage rather than in the tenth grid spot. The Dutch driver reported that there was an issue with the powertrain which wouldn’t be fixed in time. After challenging for the win yesterday, Frijns had to sit on the sidelines for the race.

There were no changes in the top five as the lights went out for the fourth Berlin E-Prix, Felipe Massa lost a place to Alex Lynn while d’Ambrosio dropped out of the points as Evans and di Grassi jumped him.

Yesterday’s victory, Maximilian Guenther, saw his race end before he’d even completed a lap as he fell foul of a concertina of braking cars and lost his front end to the rear of Oliver Turvey’s NIO 333. A safety car was called while the stricken BMW i Andretti was removed from the track.

As the race resumed the first reports of rain starting coming in, drops in the pitlane and then being called in by the drivers. Nothing came of it though and the race continued on without interruption.

The only time the Techeetahs lost either of the top two spots was at their first attack mode activation, Rowland briefly got through to second and had a go at Vergne for the lead but couldn’t make it stick and da Costa used the extra power to retake the place.

With half an hour to go the lead changed as Techeetah swapped their cars around to give Vergne a chance to regain some energy. The teamwork that didn’t pan out in the opening race worked perfectly this time and the two car swapped back with a few minutes left, da Costa becoming the rear guard for Vergne and holding off Buemi.

The top five were all line astern and Buemi was pushing to be allowed past Rowland, the swap did happen with four minutes to go but it cost the Nissans vital time and meant that Buemi spent most of the remaining time trying to catch up and only having one chance to make a move on da Costa.

More successful at making a last lap move today was Nyck de Vries, the Dutchman had been on the tails of the top four all race but practices patience and was rewarded with another fourth place after having to deal with a couple of difficult races.

Lucas di Grassi and Mitch Evans started the race side by side and made their way up through the field together to take home some solid points in sixth and seventh for Audi Sport Abt Schaeffler and Panasonic Jaguar Racing respectively.

Starting eighteenth, Andre Lotterer had given himself quite the challenge to continue his run of points finishes in Berlin, he made steady progress however and worked his way through to finish eighth ahead of the sole points scoring Mahindra, Alex Lynn.

After spending most of the race battling and swapping positions with Lynn, Felipe Massa ended up dropping back at the end and had to settle for the final point scoring position.