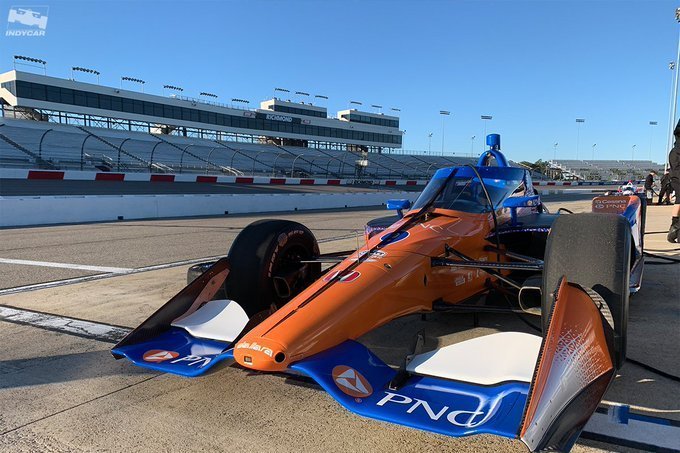 IndyCar’s Aeroscreen has been modified slightly, as the third specific test of the protection device was carried out at Richmond Raceway.

Following on from the first two tests at Indianapolis Motor Speedway and Barber Motorsports Park, IndyCar carried out another test of its new Aeroscreen technology at Richmond Raceway. Richmond is a three quarter mile oval circuit which will feature on the IndyCar calendar in 2020m marking a return for the first time since 2009.

Penske’s Josef Newgarden and Ganassi’s Scott Dixon were both on hand to carry out the test, which saw the two Champions driving with a refined version of the Aeroscreen on their cars.

IndyCar will be introducing the Aeroscreen on a mandatory, full-time basis to the series in 2020, with four specific tests scheduled over the off-season.

Reigning Champion Newgarden said it didn’t take him long to adjust to having a screen around him: “Perception-wise, it was a little different when I first got in (the car) but it took maybe 30 or 40 laps and after that you’re pretty used to it. It’s pretty normal at this point.”

The purpose of the refined Aeroscreen is to make driving the IndyCar more comfortable for the drivers, using interior inlets to redirect the airflow and reduce buffeting. Scott Dixon, who carried out the first test at Indianapolis with the previous Aeroscreen, said he could tell the difference: “A little different look with the Aeroscreen. It seems like everything is going well with all the testing done. For sure, the car’s fine.”

“That was an improvement,” Dixon continued, “especially around the legs and body.”

The test at Richmond was to try the Aeroscreen on another circuit style – the first test being a superspeedway, with the second being a permanent road circuit. This oval test will be followed by a simulated street circuit at Sebring in early November with Dale Coyne Racing’s Sebastien Bourdais and SPM Racing’s James Hinchcliffe.

Newgarden continued on to say that he felt there was little difference between driving with or without the Aeroscreen: “When I first went out my perception of how much grip the car and how much control I had was slightly different, but I think that’s because it felt foreign.”

“From a tuning standpoint, it didn’t take that much to get it back into the correct window as far as the balance – the balance is very good even with the Aeroscreen on. From that point, I don’t think the cars are going to change that much going into next year.”