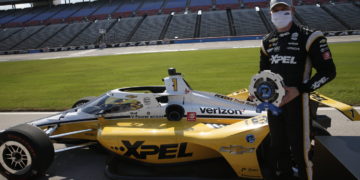 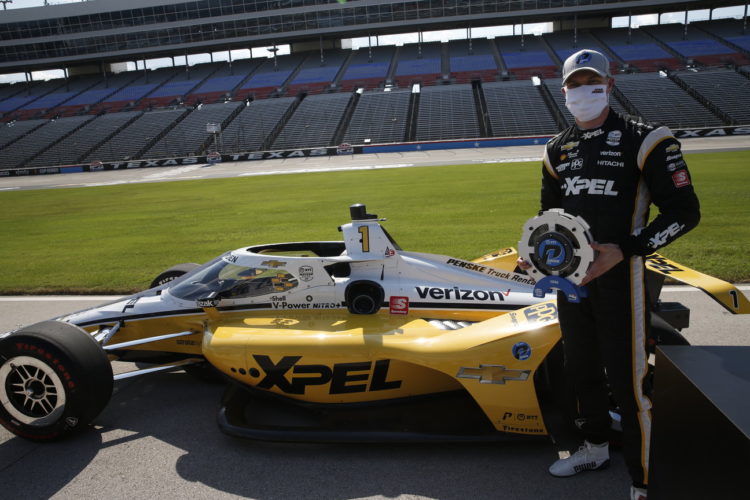 Polesitter for the Genesys 300 Josef Newgarden says the effects of the new Aeroscreen on the cars is really obvious in max downforce trim.

The defending IndyCar Champion snatched pole position away from Scott Dixon in the closing minutes of qualifying for the Genesys 300 at Texas Motor Speedway. The Penske driver logged an average of 215.740 over his run to beat Dixon by 0.0228 seconds.

Speaking afterwards, Newgarden explained that the new-for-2020 Aeroscreen has made the cars a bit trickier to drive than their 2019 counterparts. The Aeroscreen is a cockpit protection device mandatory on the cars for 2020, with some of the testing having been carried out at Richmond Motor Park in preparation for smaller ovals.

Newgarden says the drivers can really feel the difference, particularly in the stifling heat in Fort Worth:

“We’re pretty much maxed out [on downforce] in qualifying, max downforce is a lot more difficult this year than it was here last year. Part of that is the Aeroscreen – the car has more weight, and mechanically it’s a little more difficult to drive with more weight up high and the higher centre of gravity and the forward weight distribution. But the shaping of the Aeroscreen means a very slight downforce loss so we’re definitely seeing the difficulty of driving with Aeroscreen a little bit. It’s not quite as stuck as last year. But everyone is maxed out, you’re going to see everyone running with max downforce as possible on the car for the race.”

“We’re going to be hoping the sun sets as soon as possible so it cools off, the cooler it gets the more downforce we have so it’s going to be a fight to keep the car on the track.”

Practice saw three cars hit the barriers, with Rinus Veekay and Ed Carpenter both losing their ECRs – Veekay hit the barriers hard, while Carpenter merely tapped it after spinning. Ryan Hunter-Reay also tapped the barrier and damaged the right front corner of his car, while Takuma Sato couldn’t complete his qualifying run after crashing on his warm-up lap.

Despite the trickiness of the cars, Newgarden says he could tell his Penske was planted under him as he set off on his qualifying run aiming to beat Dixon’s time.

“I don’t want to say I was surprised, I felt like the car was quick.” Newgarden said. “I didn’t know whether we had enough to beat Dixon, he looked really good in quali trim but I felt the car was great. I just tried my best to stay flat and that’s all I had to do really – try to keep it pinned around the track. The car was perfect, I was telling my engineer “Great job man, you nailed it, this is perfect for the first qualifying!”