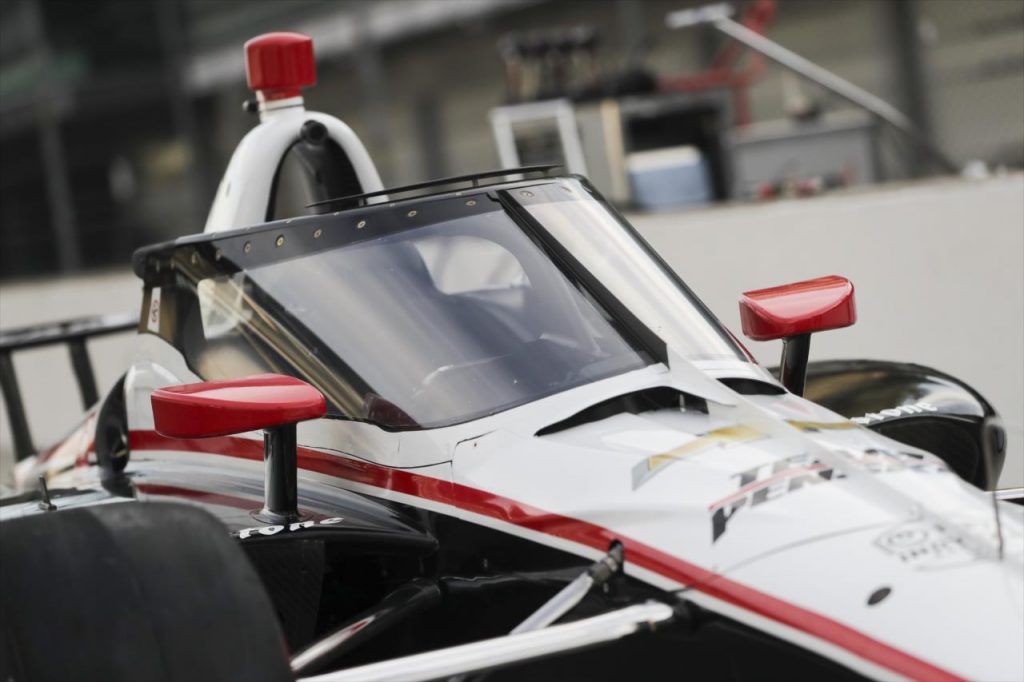 Barber Motorsports Park – IndyCar carried out its second test of the Aeroscreen on Monday, with Ryan Hunter-Reay & Simon Pagenaud.

Following IndyCar’s first test of the new Aeroscreen technology last week at Indianapolis, Ryan Hunter-Reay and Simon Pagenaud were on hand to carry out another test on Monday.

Held at Barber Motorsports Park, the Andretti Autosport and Penske drivers carried out testing in wet conditions to evaluate how the Aeroscreen performed.

The safety device, developed by Red Bull Advanced Technologies, has been chosen by IndyCar as their cockpit protection system – offering a completely different data set to what Formula 1 has gained by introducing the Halo concept in 2018. The Aeroscreen is an advanced ballistic screen/halo hybrid which encloses the cockpit almost entirely, and is mounted to the chassis using a titanium frame.

From 2020, all IndyCars will mandatorily use the Aeroscreen from the start of the season, with delivery to the teams due before Christmas.

While last week was testing out the Aeroscreen’s effects on a car on an oval, this test included extraction and extrication of the driver efficiently. Both Hunter-Reay and Dixon said this wasn’t an issue on the day.

“A guy like me, who’s 6-foot-2,. I’ve got that down pat – easy,” Hunter-Reay said told IndyCar’s official website.

Penske’s Will Power, who carried out the test last week at Indianapolis, said: “It’s something you’ll practice a lot. You think about how many times you get in an out (of the car), you’ll get good at it. I’d rather have it around my head than worry about if it’s a struggle to get out.”

Hunter-Reay also got to experiment using the Aeroscreen in wet conditions as there was varying degrees of moisture during Monday’s Barber test.

“Tear-offs were good,” he said. “Just like on your helmet, the more tear-offs you (use) the more warping effect there is; same on the Aeroscreen.”

Pagenaud was pleased with what he experienced at Barber.

“IndyCar and Red Bull did a fantastic job, really,” he said. “We’re just fine-tuning (it). Mostly, air into the cockpit. The visibility is great. I think the car looks pretty futuristic, which I’m sure the kids will enjoy that.

“It’s an evolution. It’s a great evolution into safety. It’s a new step for IndyCar going forward. As a driver I can’t thank them enough for the effort to try to provide us better safety. We’re all going to have to get used to it, for sure, but all positive today.”

“Honestly felt great in the wet!” he said in a tweet. “Visibility might even be better than it would with the helmet alone as water seemed to disperse better on the aero screen!”

Future tests are scheduled at Richmond Raceway on Oct. 15 (drivers will be Dixon and reigning series champion Josef Newgarden of Penske) and at Sebring International Raceway on Nov. 5 (with James Hinchcliffe of Arrow Schmidt Peterson Motorsports and Sebastien Bourdais of Dale Coyne Racing with Vasser-Sullivan).

INDYCAR President Jay Frye said members of the AMR IndyCar Safety Team have discussed and started practicing how better to assist drivers with egress, when necessary.

“They’ve had the frame, the piece that they’re already practicing on,” he said of the group which travels to all INDYCAR events. “They’re also practicing on if you had to take the (Aeroscreen) completely off (to see) how quickly that could be done. It’s very quick at this point. We have some great tools to do it.”

Frye said he expects everyone involved to work better with the Aeroscreen as they work with it more. Frye noted there is additional space for someone on the outside of the cockpit to lean on, which provides leverage to work.

“At the end of the day, we’re really hoping that this creates (a situation) where you don’t have to extract anybody, right? It’s there to protect people,” he said.

“This is, to me, a game changer,” he said. “This is big. This is something that will really change the complexion of the sport for a long time to come.”