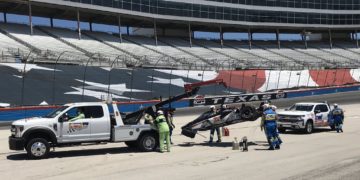 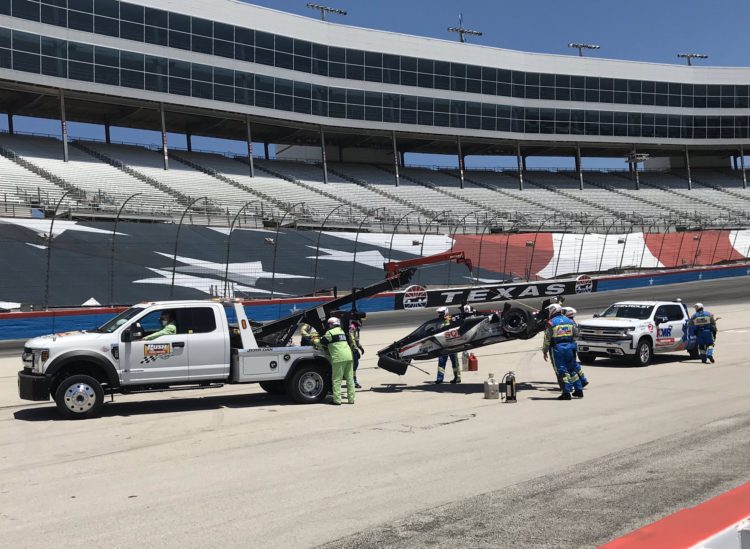 Genesys 300 – Ed Carpenter Racing’s Rinus Veekay was uninjured after crashing his car early in practice at the Texas Motor Speedway.

The Dutch rookie was taking part in the rookie/new participant part of the practice session early on at the Texas Motor Speedway, and had just gone quickest overall when he lost the rear of the Ed Carpenter Racing car.

Touching the white line after going too low, he hit the back of his car off the wall. He was uninjured and clambered clear as the session went under yellow flag conditions.

Rinus Veekay uninjured after this crash early in practice at @TXMotorSpeedway. #IndyCar #Genesys300

”Its very tough.” Veekay lamented to NBC after the incident. “I really have to call it a rookie mistake, after going too low. I will definitely learn from this and that if you make a mistake, it’s done.”

“I will try to look at much as possible at what Ed [Carpenter] is doing and reset for qualifying now.”

Veekay’s car will now need to be rebuilt for qualifying, with the young Dutchman now set to take part in the second session with just eleven laps under his belt.

Ed Carpenter Racing have released a statement about the crash, saying: “After an incident early in the rookie session, RVK has been checked and released from the infield care center. He is cleared to drive. The crew has already began repairs on the No. 21.”

Shortly after Veekay’s crash, Ed Carpenter also lost the rear of his car coming out of Turn 4. Leaving the corner, the back stepped out and Carpenter slid around and to a stop a few hundred metres further up the track. Miraculously, he managed to avoid hitting anything solid and only gave the barrier a light tap with his left rear tyre.

“Safety has brought the 20 back to our pit box.” said the team. “EC did not have to go to medical and will go back out on track. Only damage appears to be flat-spotting the tires.”