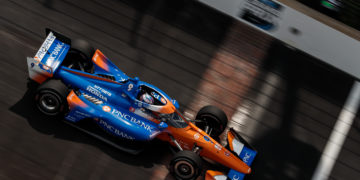 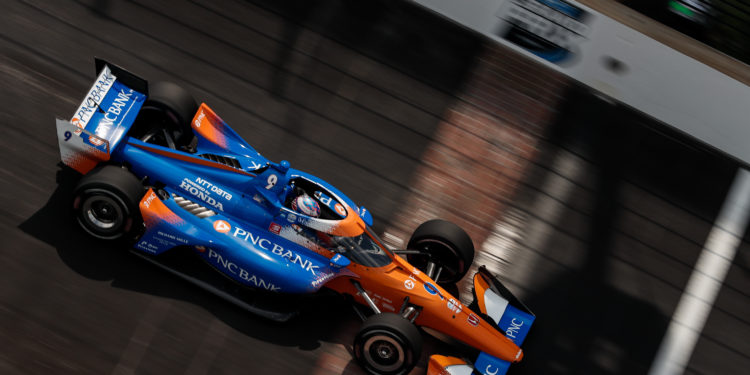 Scott Dixon has taken his second race win of the 2020 IndyCar season, finishing almost 20 seconds ahead of the competition at the GMR Grand Prix in Indianapolis on Saturday.

The five-time series champion, who came out on top at the season-opening race in Texas last month, started the race from seventh on the grid after failing to progress into the Fast Six session on Friday.

After staying out of trouble at the start of the race, Dixon found himself running in the top six early on and was the first of the front-runners to make a pit stop on lap 11, committing to a three-stop race.

The Australian made his second stop on lap 34, which proved to be strong timing for the Chip Ganassi team as only a handful of laps later, the one and only caution of the race was deployed.

The yellow flags were waved after Oliver Askew, who managed to make the Fast Six on Friday on just his second IndyCar entry, crashed at the final corner. The caution saw the then race leader Will Power make his second pit stop, which shuffled him down the order.

Power’s woes were deepened later in the race during his third pit stop, as he stalled while pulling away from his pit box, costing himself more time.

Graham Rahal looked to be in a strong position, as his first pit stop came on lap 26, indicating that the Rahal Letterman Lanigan racer was aiming for a two-stop race, a contrast to the strategies around him. Just past the halfway mark, Dixon overtake Rahal for the lead of the race and stretched out a significant gap.

Rahal then opted for his second and final stop of the race on lap 55, and was followed into the pits by Simon Pagenaud, who had worked his way through the field following a disappointing qualifying session on Friday.

Dixon, who was continuing to pull away out in front, decided to pit on the next lap and not risk getting caught out by a yellow flag, which would likely see him lose the lead of the race.

The 39-year-old then cruised to the finish while behind him, Pagenaud couldn’t get past Rahal despite closing up in the final laps, with the latter having significantly more push-to-pass available to use in the dying moments of the race.

Colton Herta was the leading Andretti Autosport car and crossed the line in fourth place, ahead of rookie Rinus VeeKay who put in a strong performance for Ed Carpenter Racing following his costly race-ending mistake in Texas last month.

Herta was the only Andretti car to finish inside the top ten, with Alexander Rossi failing to finish the race following a mechanical problem.

The Dutchman held off Marcus Ericsson in the final laps at the Indianapolis Motor Speedway. Ericsson, who was switched to Chip Ganassi this year, scored his best result since his podium finish in Detroit last year.

Reigning champion Josef Newgarden was seventh ahead of the one-remaining McLaren left in the field, driven by Marcus Ericsson. Santino Ferrucci and Takuma Sato rounded out the top ten.