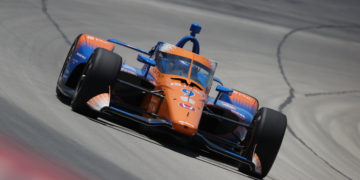 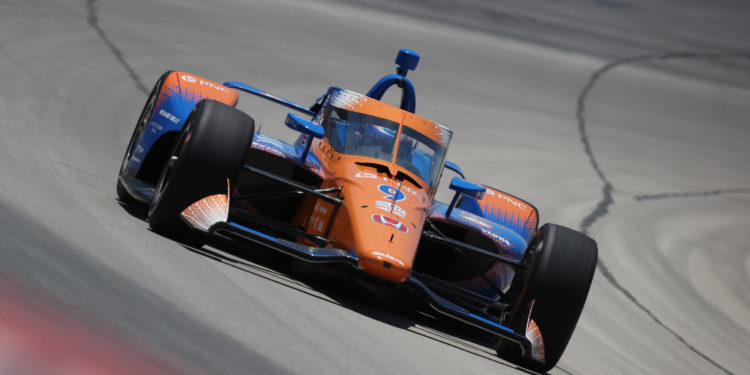 Scott Dixon has opened the 2020 IndyCar campaign with a race win in the Genesys 300, leading 157 of the 200 laps on his way to the chequered flag at the Texas Motor Speedway.

The Kiwi started the race from second on the grid behind reigning series champion Josef Newgarden, and stayed behind the Team Penske driver until lap 32, when he took the lead of the race.

Newgarden pitted on the same lap he was overtaken, reporting vibration issues with his tyres. Soon, the rest of the pack would follow him into the pits, as there was a 35-lap stint limit on the Firestone tyres.

Dixon retained the lead of the race, and only a handful of laps following the first rush of pit stops, Rinus VeeKay hit the barrier at Turn 2, eliminating himself and fellow rookie Alex Palou from the race.

A second caution was called on lap 77 for debris and in the pit stop phase that occurred on lap 80, Newgarden and Felix Rosenqvist jumped Dixon to move into first and second respectively. On the restart however, Dixon wasted no time in making his way past Rosenqvist for second before retaking the lead on lap 91.

While Dixon pulled away out in front, Rosenqvist began sizing up Newgarden and managed to pass him on lap 119. Newgarden, who was struggling once again, opted to peel into the pits for fresh tyres and was soon followed by Dixon, Simon Pagenaud and Rosenqvist, who were all competing towards the front of the field.

Newgarden’s woes continued into his latest stint as he found himself being overtaken by Zach Veach and Charlie Kimball before he made his penultimate pit stop on lap 154. His early stop gained him time as he managed to pull himself back into P3, with Ed Carpenter and Conor Daly getting ahead of Pagenaud and Kimball.

Out in front, the two Chip Ganassi cars of Dixon and Rosenqvist pulled the gap to 15 seconds, with Rosenqvist rapidly closing in on his veteran teammate. 15 laps to go and Rosenqvist made his final pit stop. He was followed in three laps later by Dixon, who managed to reemerge in the lead.

However both cars found themselves in heavy lapped traffic and when Rosenqvist attempted to pass James Hinchcliffe around the outside of Turn 2, he lost the rear of his car and spun into the wall, ending any hopes of his maiden win in the IndyCar series.

Dixon held on to take the victory ahead of Pagenaud and Newgarden, while Ed Carpenter managed to get his car into fourth, ahead of Conor Daly who recorded his first top-five finish since Gateway, 2017.

Zach Veach followed, scoring his third top-six finish in IndyCar. The Andretti Autosport driver led his two teammates Colton Herta and Ryan Huner-Reay. Hunter-Reay was forced to filter to the back of the field and take a drive-through penalty at the start of the race after his crew was forced to work on his car up right up until the cars took the circuit for the rolling start.

His teammate Alexander Rossi endured similar issues and took the same punishment, but couldn’t formalise a comeback similar to Hunter-Reay’s, crossing the line in 15th.

Oliver Askew was the only rookie in the field to record a top ten finish, as he came home in ninth place, ahead of series veteran Tony Kanaan, who is taking part in his final year of IndyCar racing in 2020.

Takuma Sato failed to make the start of the race after he crashed out in qualifying.